Objectives: The students will...

Motivation: (Anticipatory Set): Warm-Up: The Great Compromise Cartoon Analysis (Below is a sample of worksheet in student workbook): 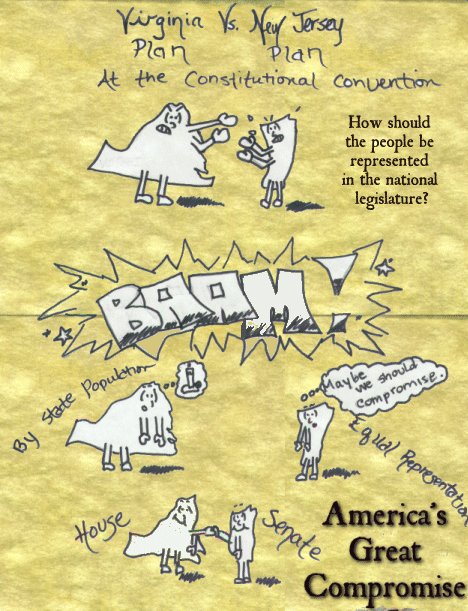 Answer: Delegates to the Constitutional Convention did not know how to set up representation in the legislative branch. Large states wanted representation to be set up based on the population of each state. Small states wanted equal representation; they compromised by creating a two house, or bicameral, legislature with a House of Representatives where the number of delegates is based on a state’s population, and a Senate, where each state has two votes. These houses make up the present-day Congress.

· Have students read about the Great Compromise in their textbooks or using the Internet.

· Use the websites below to print biographies of the key delegates who attended the Constitutional Convention. Laminate and distribute the biographies to each student. Names in bold should be used first. Additional names can be allotted for remaining students.

· While students work, distribute the roles of the delegates to the convention to each student.

· Students should read their roles carefully. Have them take notes and determine which way the delegate voted on the Constitution and why.

The website for this listing is found on the WWW at:
http://www.archives.gov/national-archives-experience/charters/constitution_founding_fathers.html

If you are typing these web addresses, use the underscore symbol between the words “constitution founding fathers.” (Shift + - =_) _ is an underscore.

Description: (Instructional Input): Simulating the Constitutional Convention
Place the state names on the desks around the room.

Have students move to their respective states. Students should introduce themselves to other delegates in the room and to their own delegation.

Begin the Convention with the introduction to George Washington, President of the Convention, the oath of secrecy, and the review of the rules of order.

Distribute the following "bill of proposal" to each state delegation. Each state has its own individual bill. Have each state discuss the issues and record their responses on the sheet. The "bill" should be used to guide any member of a state delegation that wishes to participate in the debate during the convention.

Debate the following issues:
1) How should states be represented in the new government?
2) Should slaves be counted as a part of a state’s population?
3) How should the national executive be elected?

Post each of the options on the board. Use poster board or large newsprint to post each topic when it is time to discuss each. If these materials are not available, use the chalkboard or overhead projector.

A delegate must nominate one of the options to be debated. It is then seconded and discussed.

Students should then place a solution on the table, which must be seconded as well. In order to pass, the option must have the support of a majority of states. State “delegations” must discuss the proposed solutions within their own groups before voting as a state.

Have the students try to compromise on each issue after it is debated. As Washington, lead the debate so that a compromise is suggested.

Vote on suggested compromises by state. Each state records its vote for each proposal on a piece of paper and submits it to the President of the Convention, who reads the votes from written pieces of paper. Record the votes for each state and post them on the board.

· If the delegate did not sign, have them explain why he chose not to.

· Debrief the experience by asking how it felt to be a delegate and by asking about the importance of compromise on certain issues.

Evaluation: The lesson will be evaluated by…
1. Levels of participation by each student;
2. Student’s scores on future tests and quizzes;
3. Quality of students’ written research pieces.