I am writing on the day that Americans celebrate the life and legacy of the Rev. Dr. Martin Luther King, Jr. Every child of school age in America has been taught about the contribution that Dr. King made to the social and political life of Americans through the struggle known as the Civil Rights Movement. We all know the lines spoken by Martin Luther King on the steps of the Lincoln Memorial in 1963 when he described his dream for America.  The electronic media is abuzz tonight with the question "is the election and inauguration of Barack Obama the realization of Dr. King's dream?" There are as many answers as there are individuals responding to the question. But all can agree that this evening, we go to sleep tonight waking up to a glorious and historic day in the life of our nation. No matter what one's skin color, class, political orientation, or station in society, we can be proud of our nation that we have overcome the immediate expression of racism by electing an African- American to the nation's highest political office. 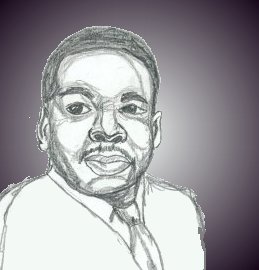 Experts and laypersons agree, though, that Dr. King's dream is only partially accomplished. The scourge of de jure segregation in the south and many systemic expressions of economic racism have been dealt with through accomplishments such as the Civil Rights Act and Voting Rights Act of the 1960s. In the ensuing decades, racial integration and affirmative action have raised millions out of poverty and given them the chance to realize their fullest potential as humans. These achievements can be directly attributed to the work and martyrdom of Dr. King. But the challenges of our society include systemic and attitudinal prejudices that still linger, leading to economic decay in our urban centers and an achievement and earnings gap among people of color when compared with the white political structure that continues to cling to power. Many people of color and progressive whites continue work to make our nation a more pluralistic and tolerant society. Enter Barack Obama, a transformational political figure who can help guide the nation to write the next chapter in the struggle for equality, equity, and social justice.

The inauguration of Barack Obama is not the realization of the dream outlined by Dr. King. It is the prologue, the introduction to the story of the removal of racial hatred and discrimination, not so much in the outward trappings of society, but more in the hearts and minds of men and women in their daily lives. Through the mutual cooperation and assistance that the challenges of the economy, the education system, and foreign policy will present, Americans can reach out to each other in the same way that Barack Obama built the black-white coalition that got him elected. Now the nation will install a chief executive and commander-in-chief whose background is as multi-cultural and bi-racial as the history of the nation and free world he is about to lead.

The eyes of the world are on Washington, DC today and tomorrow as Barack Obama takes on the mantle of the American Presidency. Steeped in tradition, the presidential inauguration's protocol of race and class is being broken with the ascension of a black man to the most powerful office on the planet. The American electorate has overcome its aversion to the placement of people of color in the halls of power where previously only white men walked, even through those very halls were built from the sweat of black slaves. Obama's inauguration is something of a redemption for America, a cleansing of its racist past, in which people of all races and backgrounds can be proud. I will be on the National Mall tomorrow to witness the historic event unfold, knowing that generations to come will remember and study the day that I am experiencing as it is being written into human consciousness. I am swelling with pride to be an American, full of emotion that the nation is living out the "true meaning of its creed," that we are "out of many, one," that we are able to bring into the present that which has been written by Thomas Jefferson, Abraham Lincoln, and Dr. King, that "all men are created equal."