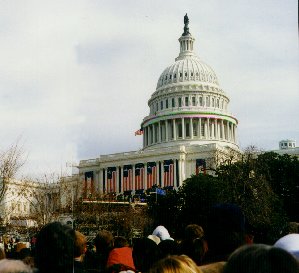 Topic: the Inauguration of the 44th President of the United States, Barack H. Obama II

Objectives: The students will:

1. describe the symbolic and political significance of the ceremony of the inauguration of the President of the United States.

2. identify the elements of the US Government that are involved in the inauguration ceremony.

3. show how the inauguration is the culmination of the democratic process of electing a president.

Opening Activity (Warm-Up): The Inauguration and the Constitution

A. Have students locate the Presidential oath of Office in Article II Section 1 of the US Constitution. For quick reference:

B. Choose a student to act as the president and one to act as the chief justice of the US Supreme Court. Have them do a brief "act-it-out" showing how the Oath is administered.

C. Have students watch the president take the oath on video: http://www.youtube.com/watch?v=tQhWtRW-KKA (9:56)
Also available at Kids and Technology.

Discuss the meaning of the words of the oath given the historical circumstances for each of the presidential inaugurations since 1933.
The video used here includes the first inaugurals for FDR, Truman, Eisenhower, JFK, LBJ, Nixon, Ford, carter Reagan, George H.W. Bush, Clinton, and George W. Bush. Discuss the importance of the oath given the times: The Great Depression, WW2 and The Cold War, the assassination of JFK, the coming of the Watergate scandal, the end of the Cold War, the Clinton scandal, the 9/11 terrorist attacks, and the promise and challenges facing of the Obama administration.

A. Working in groups, have students review some of the more memorable inaugural addresses given at past inaugurals. These may include:

D. Once it has been made available, have students examine Obama's inaugural address. Compare the Obama address with others that have come before it. Discussion questions or  or writing prompts may include:

B. Have students determine which media outlets were positive in their outlook or negative.

C. Have students use media coverage to explain why they believe the inauguration of Barack Obama is an import event in US history.

D. Coming up: Have students develop their own quiz on the inauguration of Barack Obama. Allow students to give their quizzes to fellow classmates to see what they learned and how closely they followed the events of the inauguration.

Assessment: The lesson will be assessed by

1. The quality of student responses in writing and discussion activities.

2. Scores on future tests and quizzes.